A transportation survey conducted in April revealed that 34% of Long Beach State students drive above average commutes of 16 miles or more instead of living locally to attend their classes.

A three-hour commute does not stop fourth-year students Alexa Banos, a kinesiology major, and Romer Banquiles, an English literature major, from attending in-person classes for their last semester as undergrads.

Banos and Banquiles said they preferred to carpool together from Palmdale twice a week rather than uproot from their hometown for only eight months. 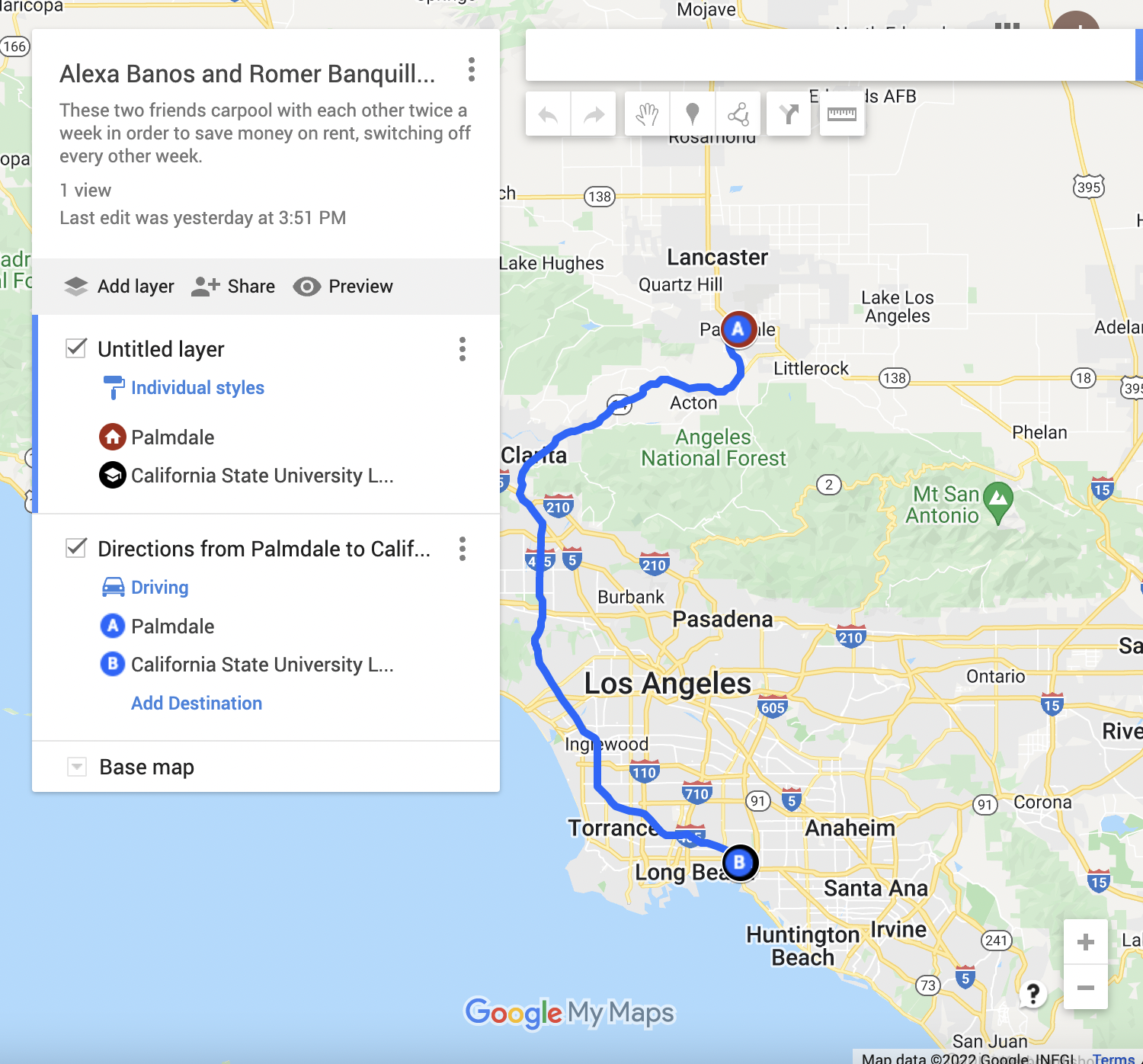 “We would have moved the second we got into Long Beach,” Banquiles said. “[But] because of the pandemic and virtual schooling, we thought that moving during that short period of time wouldn’t be worth it.”

By alternating their vehicles weekly, the two students found a way to save on gas, which reached record highs this year.

“When it comes to gas money versus rent money, gas money is definitely cheaper,” Banquiles said.

Each month they spend between $200 to $250 on gas, which is a better spend compared to the average monthly rent of $1,795 for a single bedroom apartment in Long Beach.

Banos and Banquiles travel around 78 miles each way to campus, making them part of the 34% of students who commute above the average of 16 miles according to the Spring 2022 CSULB Student Transportation Survey. 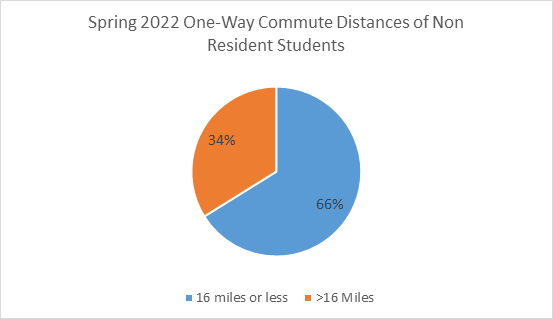 Banos, who begins her graduate program next semester, said she will have in-person classes five days a week. Commuting even just twice a week this semester has already drained her, she said.

In between classes, both Banos and Banquiles said they take advantage of campus resources such as clubs, study areas and the gym, but their days become long and full, limiting their free time.

“I enjoy the facilities as much as I can. I go to the campus gym every Tuesday [and] Thursday,” Banquiles said.

Banquiles and Banos said they enjoy exploring places to hang out off campus, too, such as grabbing a bite at the Hangar.

The Hangar, located near the Long Beach Airport, is a small artisanal food court and boutique the students found one day after class.

Extreme commutes over an hour each way, like Banos’ and Banquiles’ drive, have become more common, making up 43% of the 160 students that participated in the survey. This can lead to “physical, social, and psychological consequences for students,” according to a study by UCLA CityLab.

Banquiles and Banos both said they feel like they’re missing out on the traditional college experience.

Banos said she noticed that CSULB, though advertised as a commuter-friendly campus, does little to support commuter students, such as adding parking spaces and reducing the price of parking permits.

Of the 80% of CSULB students who commute by car, 66% drive alone, 6% carpool and 9% of students are dropped off, according to the Spring 2022 Student Transportation Survey. 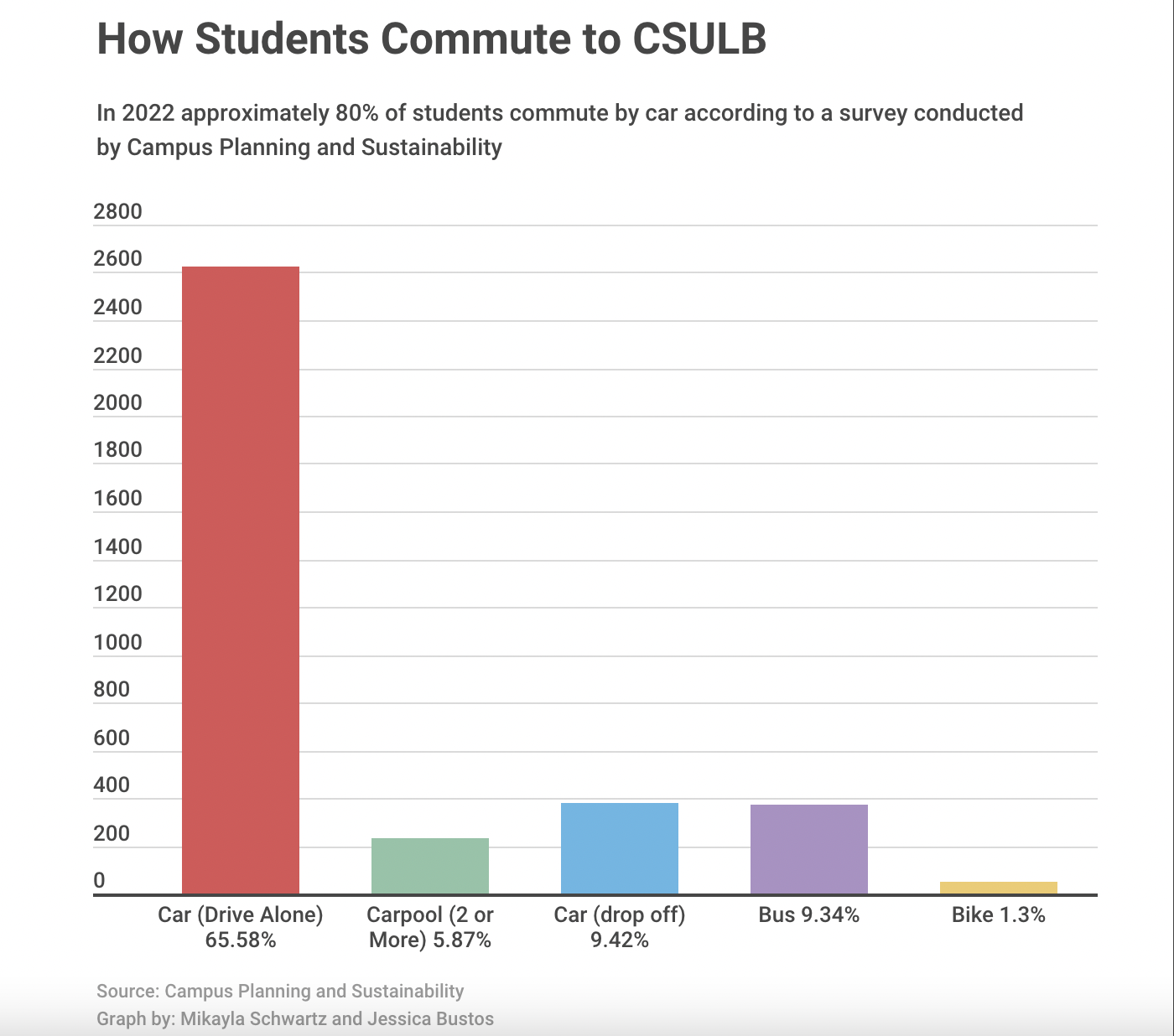 Banos said she looks forward to living close to campus next semester, saving her the long commute and allowing her the chance to make more connections on campus.

“I think having that little freedom is really nice,” she said. “It also would give me the opportunity to just explore the area a lot more.”