The living celebrate the dead

The Southwest Terrace of the University Student Union was filled with students enjoying the musical atmosphere and Mexican food of the Dia de los Muertos, or Day of the Dead festivities hosted by Beach Pride Events last Thursday. Day of the Dead is a traditional Mexican holiday that is celebrated[Read More…] In Photos: Artists get community feedback

All five galleries in the Fine Arts Building contain artwork from a variety of Master of Fine Art students in this weeks Graduate Critique Week. The week allows MFA graduate students to receive feedback on their artwork from people throughout the community, in addition to the critique classes they are[Read More…] The powerful voices of the CSULB Opera Institute filled the Gerald Daniel Recital Hall on Nov. 3 and 4, for its Opera Masterpieces show as the performers acted out scenes from various operas. To set the theme for the show, a picture of the seaside was projected onto a screen,[Read More…] Takeoff soars above expectations on his solo debut

When Atlanta trio Migos blew up in the mainstream in late 2016 with the massive success of their number 1 single, “Bad and Boujee” the internet was ablaze with memes making fun of the exclusion of member Kirshnik Khari Ball, also known as Takeoff, from the track. People making the[Read More…] 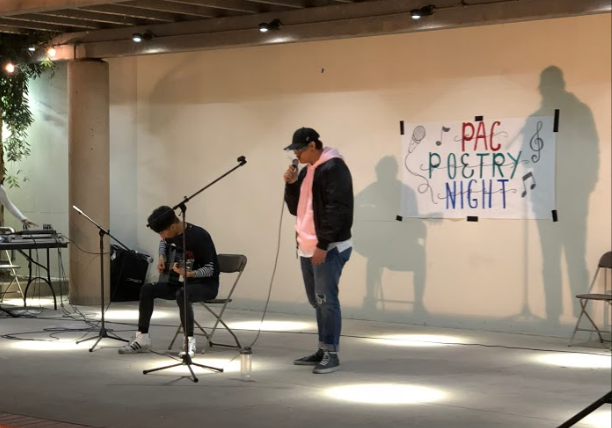 Snaps all around at PAC Poetry Night

The sounds of clapping, singing and laughter from an audience of hundreds of attendees that filled the outside of the Kin Courtyard as students performed both original and covered works on stage. The Pilipino American Coalition hosted its PAC Poetry Night on Thursday. The night welcomed PAC club members and[Read More…] The essence of marijuana hanging in the air and the eager faces of shoppers and hip-hop heads were sure markers of this year’s ComplexCon Saturday. The two-day fashion event and music festival garnered thousands of style enthusiasts to its third annual convention who wore the latest trends ranging from yellow[Read More…] A vibrant and engaging dance performance from CONTRA-TIEMPO explores issues in today’s society through diverse movements and the expression of joy. CONTRA-TIEMPO, a dance company that combines multiple styles such as salsa, Afro-Cuban and contemporary, is collaborating with Los Angeles band Las Cafeteras to premiere its show joyUS justUS 8[Read More…] Long Beach residents to vote on measures concerning their city

Long Beach residents will vote on five ballot measures that apply to the city in the Nov. 6 statewide general election. Four of these items are on ballots after a city council vote, while the one remaining item was added after a citizen’s petition gathered 46,082 signatures from voters registered[Read More…] With the turning of the season comes fuzzy sweaters, cozy nights and a consistent stream of pumpkin-related paraphernalia lining shelves and filling up Instagram feeds. There are two prominent coffee sources on campus for students to get their daily holiday caffeine fix: Starbucks and The Coffee Bean and Tea Leaf.[Read More…] When you’re a child, movies such as “A Nightmare on Elm Street,” “Poltergeist” and “The Exorcist” were scarring and kept you up at night, fearing that the entities seen would come and get you in your sleep. But the one that ruled them all was the 1990 miniseries adaptation of[Read More…]